The choir was formed in 1983 by Valerie Baulard, a local singing teacher with a background in professional singing in both opera and oratorio, who had a cottage in the village of Langcliffe, hence the name.

Originally consisting of ten women and one boy treble, their first performances were at outdoor venues, such as Fountains Abbey, singing madrigals and part-songs a capella.

In 1984 the group expanded to include men’s voices and the full SATB choir was born. It was a community choir with membership open to anyone with a love of singing who could hold their line of music in four-part choral works.

By the late 1980s the repertoire was expanded to include small choral works, madrigals and part songs both secular and religious, and their first foray into staged productions was Trial by Jury.

By 1992, having a number of pupils in the choir who were good enough to take the solo parts, Val thought the time was ripe to put on a performance of Mozart’s Magic Flute, a work she had enjoyed as soloist at Glyndebourne.

The choir extended its operatic repertoire with staged performances including The Marriage of Figaro, Don Giovanni, and Orpheus in the Underworld.

In 1993 Brian Heaton was appointed as accompanist, and as the choir grew in number and ability they performed Handel’s Messiah, requiems by Fauré, Mozart and Brahms, and in collaboration with Settle Orchestra under Howard’s baton, performances of Verdi’s Requiem, Mendelssohn’s Elijah and two opera galas.

It was a proud moment in 2002 for both Val and the choir when she received the Sir Charles Groves Prize from Making Music for her services to music in the community. 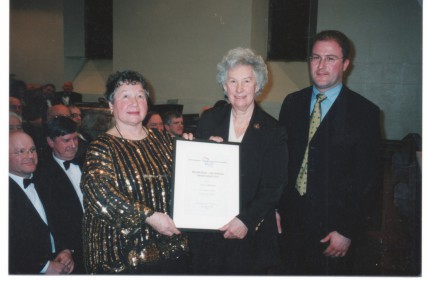 Val receiving her award from Lady Groves
In 2004 Val retired and Tricia Rees-Jones, a choir member with an extensive musical and singing background, took over as music director and in 2006 the choir commissioned ‘The Leaves of Life’, a major work by Andrew Gant, the Master of Music at the Chapel Royal.

In 2009 Tricia moved out of the area and Nigel Waugh was appointed. Under his direction the choir has given some notable concerts over the years, ranging from Benjamin Britten’s St Nicolas Cantata with full orchestra and children’s choir and Felix Mendelsohn’s Elijah with orchestra and professional soloists, to performances of Songs from the Shows and in 2018 a concert version of HMS Pinafore.

The choir have also hosted a series of ‘Come and Sing’ events featuring not only the Messiah but also The Armed Man and Favourite Opera Choruses which have attracted singers from all around the Craven area, and have continued the association with Settle Orchestra in concerts to mark the 60th anniversary of the Queen’s Coronation in 2012 and the Orchestra’s own 50th anniversary in 2017.

In July 2021 Nigel Waugh retired after 12 years and his replacement is Darren Everhart.

We wish Nigel a very long and enjoyable retirement and as he is staying in Settle, look forwards to seeing him around.